In Loving Memory of George Heiring

It is with deep sadness that Georgia Writers Museum shares news of the passing of George William Heiring, on July 20, 2021. George was involved with the museum in its founding days, first as a writer and then as a leader, serving on the board of directors for five years, and as president from 2017 to 2019.

George’s history with the museum was a series of “firsts.” He was there for the ribbon- cutting ceremony in 2014, and was the  first author to do a reading and book signing with his book, Turning Leaves. He headed the first collaboration for youth programs, called “The Imagineers,” working with Lake Oconee Youth Alliance to teach middle school students how to be writers, easily calling on his engaging manner, creative mind, and sincere warmth and passion for young people. He recruited the museum’s first supporters through his association and work with the Greensboro Writers Guild. 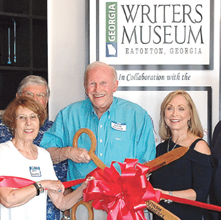 When a career opportunity drew GWM’s former president overseas, George took on the leadership role, even though he was quite happy and busy with retirement. He oversaw a challenging time in the museum’s growth, presiding over our 2019 grand reopening and ribbon-cutting where we showcased a “reimagined” museum. It was under his leadership that the museum purchased property on the courthouse square in Eatonton, securing a permanent home and providing for our future growth and expansion.

George leaves a wonderful legacy not only with Georgia Writers Museum, but with the larger community to which he gave so much of his time and talent, and the many individuals he mentored and gave wise counsel. His gifts as writer, poet, and storyteller allowed him to share his positive view of the world and all it has to offer, most recently in his award-winning book, When Do the Lions Eat?, detailing remarkable adventures in travels with his wife, Donna.

We will long remember George for the twinkle in his eye and the ready smile on his lips. May his legacy live long and may he rest in peace. We love you, George.

The Heiring family has asked those wishing to honor George’s memory to consider a donation to Georgia Writers Museum in his name. You can do that by clicking here.