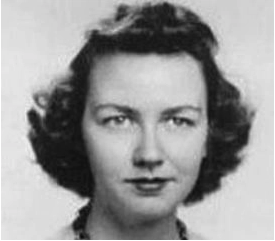 Flannery O’Connor is best known for her short stories and novels, including A Good Man is Hard to Find, published in 1955.

Flannery was born to Catholic parents in Savannah, Georgia in 1925, and became an avid reader at an early age.  The O’Connor Family moved to Milledgeville when Flannery was in high school. Shortly after their move, her father passed away. Flannery completed her education and enrolled at Georgia State College for Women.

Flannery went on to receive a master’s degree from the University of Iowa Writer’s Workshop and was awarded a residency at Yaddo. Through the influence of mentors who recognized her unique writing style, she began publishing short stories and novels.

In the early1950s, Flannery developed Lupus, the same disease that took her father.  She returned to Milledgeville to live with her mother at Andalusia, the family farm, where Flannery wrote and cared for her flock of peacocks until she passed away. She was only 39 years old.