As Seen On Eatonton Development Authority and The Eatonton Messenger 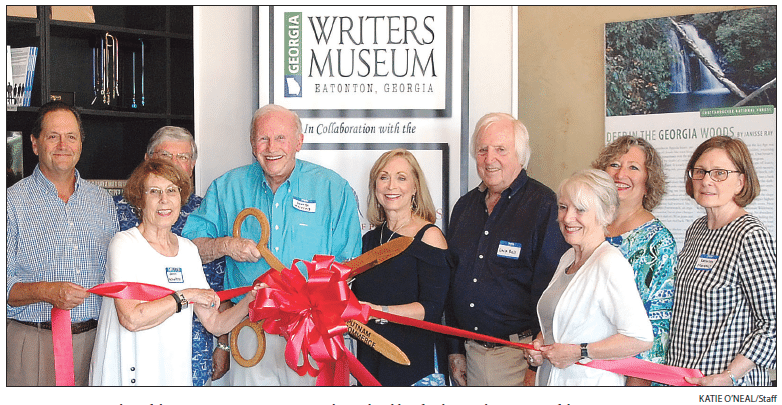 The Georgia Writers Museum (GWM) held its grand re-opening on Thursday, June 27. With many changes made, visitors will have an experience of a lifetime through audio, visual and interactive accessories added to the exhibits.

“The first thing that we did was to make a major change from a museum that focused primarily on education to one that was an experience, that connected with visitors in a way that was fun, inspirational as well as educational,” GWM Board member/museum Content Chip Bell said. “That meant altering the exhibits from being just things you read with pictures to [exhibits] that have artifacts and have stories, exhibits that allow visitors to physically engage more.”

Throughout the museum, there are places that visitors can lift things up to read or push a button to hear audio or watch a short video clip.

The three main exhibits in the museum feature novelist, short story writer, poet, essayist and activist Alice Walker, influential author and renowned journalist Joel Chandler Harris and novelist, short-story writer and essayist Flannery O’Connor. Walker and Harris were both born in Eatonton, and O’Connor lived most of her life in Milledgeville. Each exhibit has an original portrait painted by acclaimed artist Chris Cook hanging above them.

“There have been a lot of improvements,” GWM Board Member and Treasurer Kathleen Morency said. “Even if you’ve been here before, I would definitely come back.”

“The Hall of Fame was established in 2000 as part of the University of Georgia’s Hargrett Rare Book and Manuscript Library to honor Georgia writers and to introduce the public to the library’s rich collections for research into Georgia literature and cultural history,” according to www.georgiawritersmuseum.com .

When looking at the Georgia Writers Hall of Fame exhibit, the photographs of the writers cover an entire wall and run from the ceiling to the floor. The size of this exhibit shows visitors the impact literature has had on the people of Georgia before they even read the first biography. Some of the photographs turn, and then visitors can read a biography on the back.

“We’ve tried to create a more interactive experience for people because while we want to celebrate great writers, particularly the three that we focus on: Flannery O’Connor, Joel Chandler Harris and Alice Walker, we also want to celebrate people who value the literary world,” Bell said.

Journalists, professors and authors instruct workshops at the Georgia Writers Museum, and famous authors from the Hall of Fame participate in “meet the author” events to talk about their work.

“This [museum] becomes an incubator for literary talent, literary interest and literary development most of all,” said Bell. “That’s primarily what we’re about here.”

The Georgia Writers Museum is open Thursday and Friday from 11 a.m. to 5 p.m., Saturday 10 a.m. to 3 p.m. and Monday through Wednesday by appointment. General admission is $7. Students are $5, and children 5 years old and under are free.

“The mission of the Georgia Writers Museum is to create a new generation of readers and writers through the celebration of Georgia’s remarkable literary heritage, a heritage that illustrates the power of the written word to transform lives,” according to www.georgiawritersmuseum.com .

A Magnetic Force
Scroll to top